After the first show at Coughlan’s I attended at which James OR was also supporting, it was a no-brainer that I’d end up returning shortly after to witness more magic unfold. This time the main attraction arrived in the form of Mark Geary, playing a show there on November 3rd. So I made my merry way into the venue, where I learned that James OR would be accompanied by one of the members of his band, Hannah Nic Gearailt (Who also plays for Emma Langford) on keys and backing vocals to add some extra colour to his set. I plopped myself down into a nice spot at the front, and away they went. The difference of having the extra layer of the keys and Hannah’s vocals behind made for quite a different set to the first one I had witnessed. While much of the songs on the previous set made the jump over, tracks such as ‘Berlin’ which had not made the cut at Cry Monster Cry made an appearance here. We also were treated to the song ‘All the Beds We’ve Been In’ from his upcoming debut album of the same name, giving us a nice little peek into what’s to come. From what I hear, he’s making good headway with that project, which you can always give a hand towards by backing him on Patreon. In other James OR news, he’s hitting the Coughlan’s stage once again this coming January, this time headlining with what will be a full band show with info on support yet to come. That’s going to be proper mental, so get your hands on some tickets soon, they’ll only cost ya 8 euro.

Following on from James was Mark Geary, who it was my first time seeing. I’d already heard great things about him, both musically and personality-wise. Hell, I had chucked a like on his page on Facebook the day before the gig and he sent me a message to thank me and telling me that he was playing the next day if I didn’t know, proper nice and interactive of him. While I was only just getting around to hearing him now, he’s been active in music for longer than I’ve even been alive, gathering tales and experiences along the way aplenty. This gig in particular was celebrating the launch of his brand new album ‘The Fool’ which had started to make waves since the moment it dropped in late October, with the likes of Hot Press giving their input on it. I had to say I was loving it myself when I gave it a whirl before committing to the gig, it’s an astounding piece of work, and he is currently embarking on a tour of Germany & Switzerland to peg it over yonder. He wasn’t alone on the stage, joining him with vocal accompaniment was Gráinne Hunt. Together they put on a wonderful show brimming with character and liveliness. Mark seemed very alive in the moment, given the opportunity I bet he’d have ditched the guitar and microphone to one side and been perfectly content to sit down and have a lovely aul’ conversation with the audience instead. As it were, there was quips and enjoyable moments aplenty in the gaps between songs, with guitar tuning providing ample opportunity for Mark to detour into insightful stories into the background of songs – Or even unrelated stories too. Him and Gráinne harmonized really well together to play some wonderful music for us. Together with the narrative behind the songs from the album, they gave a really good sense of where the music had come from and the influences behind it.

For a short while in the middle of the set, Mark left the stage to Gráinne to play a few of her own originals which was also very enjoyable. She has a lovely singing voice and it was nice to see it shine behind some tales of her own. I was eyeing up the merch that would be available after the show over to the side of the stage, and I spotted that she too had an EP that could be picked up alongside Mark Geary’s stuff, so I eagerly awaited that opportunity. Mark came back on stage to join her again and together they finished out the set. Mark must have had an ear for some harmonies coming from a particular set of people in the audience, because their singing along to a few songs had caught his attention, and for the last song he decided they’d have to join him on stage so that the rest of us could experience the harmonies he’d been hearing them add to his music. They looked rather bewildered to be finding themselves up on the stage, but they did as asked and looked to be having quite a fun time of it.

After the performance was finished, I made my way over to the side of the stage where the merch was being sold. Mark Geary’s album ‘The Fool’ was being sold on Vinyl, so there wasn’t any question about it, I immediately picked that up. I got a poster with it, and I bought Gráinne Hunt’s EP ‘Firing Pin’ while I was at it. Mark was lovely enough to stick around and chat to folks afterwards, and I got him to sign my copy of the album. He even added a cool drawing of a smiley face below it. I was off home shortly after where I immediately gave the vinyl a nice spin on the record player. I’ve added music from Gráinne and Mark to my Spotify playlist, and that’s all for now folks. And remember, keep on Merchin’! 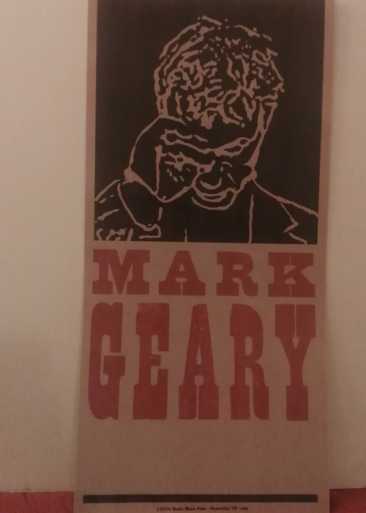 Music enthusiast, Merch Collector, blogger of both worlds combined. Check it! www.themerchperch.net View all posts by The Merch Perch

:): Stay Happy! While I was under the needle with @elradleyart at @electricsoulcork today I absolutely had to seize the opportunity to add this little dedication to @heyitsau_ra on my collarbone. Proud to be a Green Bean!
Absolutely delighted with my second tattoo, picked up at @electricsoulcork today from the incredible artist @elradleyart who did my previous tattoo as well. Such a wonderful piece picked from her flash designs that stood out to me immediately and I needed to have it, it also gives me @auroramusic vibes like her first album.
@auroramusic tour photos day 8/5, Malahide castle day 2 supporting @mumfordandsons, @dermotkennedy & @bandwildyouth. One of the most special days of my entire 2019, this concert took place on the day of Aurora's birthday. I was in prime position therefore to try my best to make this as special and memorable for her as I could to celebrate her birthday. You can see the full post about it on my profile back in June, but basically with the help of @lyndincormier and @si_wa_92 we devised a sign declaring "HAPPY B-DAY AURORA" that I held at the barrier. She spotted it early on in the show and again kept coming back towards myself during her performance. As her set neared it's end I turned around with the sign and asked the crowd to sing happy birthday to her, which so many of them joined in on it was amazing. I turned back around and realized I was being captured by the cameraman on stage shooting for the giant screens at the stage sides!
@auroramusic tour photos day 7/5, Malahide Castle supporting Mumford and Sons Day 1. When the news broke that @mumfordandsons, @dermotkennedy, @bandwildyouth and Aurora were all going to be performing in the same concert together in Dublin, I knew immediately I had to be there, being a fan of every single one of them. It certainly wasn't cheap, but I made it work and set out to do both dates of the show in June back to back. Rocked up in good time on the first day and sure enough got myself a spot at the front barrier for the duration of the concert. Had someone paint my warrior scars to stand out as the vast majority of the thousands of people in attendance would have no clue who Aurora was and I wanted her to know she had allies here. As it so happened she was quick to spot and recognise me when she was performing, and quite regularly throughout the set dancing around the stage returned towards my side and made waves and gestures directly to me now and then. It was so cool and different to see her in this kind of setting, not entirely suited to her but nonetheless making the most of it and for sure converting many people in the crowd who had been previously unawares. When she was finished I already counted this as a very special day and I still had 3 more amazing bands to see
@auroramusic tour photos day... 6/5?? Ok so after going through and posting all those photos for the last few days I'm not quite ready to hang it up yet, so who's up for a few more days eh?? This time I'm taking it back to June when I went to Bristol for Aurora's special intimate in-store performance at @roughtradebristol for the launch of A Different Kind of Human. This was such a special and unique experience to be a part of with the stripped back sound and up close performance that was simply beautiful. This was my second ever time seeing Aurora live and also meeting her, though the first time I met her she was on vocal rest so we actually got to use words this time which was lovely! At the end of the performance I managed to nab a set list, though it was not to keep for myself as I'd spotted a young girl who must've been about 7 maybe with her mother having her first gig, so I gave it to them. I'll never forget the pure joy the child had in that moment, jumping around on the spot with delight. Got a couple shots of @siljasolen in here too and was even lucky enough to have her sign my Vinyl too!
And just like that, my adventure was over. @auroramusic tour photos day 5/5: Birmingham. I took a day out of the tour to go to Birmingham a day early while Aurora and gang went to Newcastle, I went to another cool concert in Birmingham that night and continued to get up to cool shenanigans. My journey between Glasgow and Birmingham was very long, about 7 hours spent on the bus, so it was the first time all week I'd really had a chance to just... Contemplate everything, the beautiful experiences of it all. The following morning I was back on the early queueing lifestyle - I worked it out actually, I spent 35 hours queueing outside venues that week, and about 20 hours inside said venues - and building myself up for the end of it all, I was so not ready to leave it behind me. This concert was a very emotionally charged experience especially because I knew it was my last, but everyone performed their heart's out here. Someone threw Aurora a pride flag and she sang and danced with it for Queendom which was wonderful. At the end of it all I managed to meet Aurora one last time after the show to say my goodbye, it was very emotional and I was mostly lost for words. As I walked away from it to get my bus to the airport to go home, my feet dragged. I turned one last time and I put my hand in the air on a Spock salute, this caught Aurora's attention and she immediately sprang up to return the wave, shouting "Live long and prosper my friend". A week I shall never forget and always hold dear.