Yoo, so it’s about time I had another blog post featuring the ever fantastic Stephanie Rainey. Since last I wrote about her with her amazing Dublin show with Hermitage Green (Big ol’ essay of a blog post can be found here), I tucked another 2 shows under my belt before the year was out, that I unfortunately never got around to writing about. The first was another show with Hermitage Green in Cork. The second was Stephanie’s headline show at Cyprus Avenue in November, which at the time was accompanied with the release of her single ‘Sorry’.

This was an utterly amazing gig which featured a number of notable changes in Stephanie’s show. Up until then, the tune ‘Before We Fall’ had been a staple opener for her set, though this tour saw that shifted further down the set for the first time to be replaced with the banging tune ‘Question Mark’ as opener. This tour also saw the inclusion of a 4th member to the ranks, with Peter Piggott adding an electric guitar element to the show that previously had not been there. I had my curiosities about how this might work, especially when he stayed on stage, guitar in hand, when the set moved into the likes of ‘Please Don’t Go’. There was definitely no cause for worry though, he did a fantastic job and his contribution to Please Don’t Go was subtle but effective and did every bit of justice to the song. Last new point of the tour was the introduction of a full range of meeeerch, but more on that later. I want to give a shoutout to Tim Chadwick who supported the show as well. The fella is incredibly talented and put on a brilliant solo performance to open the evening, dividing his time on the stage between playing with acoustic guitar for some songs, and piano for the others. Definitely recommend checking him out for sure.

Now that I’ve sped through the previous show, let’s get into the current show in question which took place again in Cyprus Avenue in mid March. Initially scheduled for the beginning of the month, the Beast from the East swept through the country and caused the gig to be postponed, which turned my liking of the snow at the time to contempt quick as a flash. Support for this tour came from Rob Burch, but with the rescheduled date he wasn’t available for this show and so Sarah-Beth got the call-up to grace the stage before Stephanie Rainey. Sweet deal for me, got to witness two of my favourite Cork artists in the scene right now for the price of one.

Given the last minute nature of the replacement, and Aaron O Sullivan plying his trade on Guitar over in Italy for the weekend, this was a solo set from Sarah-Beth. It was a nice touch though, because it brought out the more lyrical-heavy, dreamy side of her set with the likes of her tracks from the EP ‘Your Muse’ seeing some play time, which is always nice. For this gig I was joined by my mate Darragh, so I had the pleasure of introducing him to the music of Sarah-Beth for his first time. Safe to say, like the first time I listened to her music and saw her play, he too was mesmerized and instantly hooked. I was glad that Stephanie Rainey would get to hear Sarah-Beth’s music too, because Stephanie and Gary had in fact walked in on the 1000 Beasts gig she supported in February, but had missed her set at the time. That evening ended up being the inspiration behind this International Women’s Day blog series I am currently writing (This post included) as the idea occurred to me when watching Sarah-Beth and noticing my schedule had a lot of female talent in it, including Stephanie Rainey who walked in unexpectedly about 10 minutes after me realizing this. #serendipity.

Without further ado, it was time to experience Stephanie Rainey live for my 8th time, and I was as excited as ever. Just as Darragh was joining me for this gig, he too was joined at this gig by my now-acquaintances that I met for the first time on this evening, Mary and Grainne. Just as the last headline show for Stephanie Rainey had heralded in a change to her live show, so too was the case on this evening. Besides the trending pattern of her shows/tours arriving at the same time as a new single, this time with the release of ‘Question Mark’, there was yet another new addition to her full band set-up, albeit with an asterisk for this particular gig. Joining her set-up as a 5th member going forward is none other than Kevin Herron, who we have previously seen on the blog a number of times between him being in Tiz McNamara’s band and also being the new addition to Little Hours since the summer. Kevin is taking over Acoustic guitar duties from Stephanie Rainey, freeing her up at the front of the stage to sing and perform her heart out to the crowd. That said, Little Hours got whisked off to Dubai for Paddy’s weekend and took Kevin with them, so filling in on the night was the wonderful Ian O’Doherty. Ian was fantastic for this gig, putting in a wonderful performance and was instrumental to the show going as perfect as it did.

In keeping with the adjustment to the set in November, Question Mark continued as the opening song for the night. With it’s recent release as the newest single, it was fresh on everyone’s minds and went down a treat, kicking us off to a brilliant start to the show. One thing was definitely clear from the go: This was going to be a very special evening. Stephanie, Gary, Sarah, Peter and Ian were giving it 110 percent of the magic they’re capable of, and there was a great crowd in on the evening who were very responsive for singing along, which is a key factor to any great Stephanie Rainey show. Stephanie without the guitar in her hands was able to focus entirely on singing and putting on a show for the audience, and delivered in abundance. A couple songs into the set, we were treated to something new! A lovely new song I’d never heard in Stephanie’s set before called ‘For You’. Elsewhere in the set all the usual favourite’s made their appearances, ‘Sorry’, ’13’, ‘Please Don’t Go’ etc. I’ve been so sure ’13’ was the next single in line since before ‘Sorry’ came out, however it has a couple of times been pushed further down the line of release, so it’s rather tentatively that I note now it’s pegged for a summer release, here’s hoping. About mid-way through the set, we were treated to a cover song. Too early in the typical Rainey set to be the Man in the Mirror MJ cover, it had to be something new instead that we were about to witness. Sure enough, the band cracked out a fantastic performance of the song ‘Simply The Best’ to much fanfare and approval.

The rest of the set followed usual form, with the likes of the as-yet unreleased ‘Beauty In Your Madness’ being a crowd favourite for going crazy and signalling that we were heading into the latter stages of the remaining songs. From there the energy and excitement in the room only builds up, as everyone sings along to ‘Man in the Mirror’ and ‘Nothing Of You Left to Love’. Before the show closes on 100 Like Me, Stephanie does the usual stressing to the crowd that it is in fact the last song and that they don’t do encores in a setting like this where you can’t really just ‘leave’ the stage and come back. 100 Like Me get’s the room absolutely shaking as always, but when Stephanie and Co. leave the stage, they’re blown away by the ‘we want more’ and ‘one more tune’ chants. In a huddle to the side of the stage, I observe them consider their options. And for the first time I’ve witnessed in a Stephanie Rainey show, they walk back up, and Stephanie asks us if another go of ‘Question Mark’ would suffice. It’s a resounding yes from the crowd, and thus the show opener serves also as the show closer. That being said, the energy of the amped up crowd at this point is so electric that the second dose of Question Mark is an absolutely stunning anthemic display from both the band and the crowd singing and is incomparable to the first time heard on the evening.

Merch and Next Shows

When I went to the headline show in November, I spent my last pennies of the week acquiring Stephanie’s 100 Like Me shirt and their CD with 100 Like Me (2 versions), Sorry, Nothing Of You Left To Love (2 versions) and Please Don’t Go on it which is essentially a self-titled EP if not officially considered as such. I gladly had this signed by Stephanie, Sarah, Gary and even the after-show elusive Peter Piggott at the time. For this show, I was proudly rocking the shirt and equipped with the tote bag too, so I just had to finish up my hoard with the 100 Like Me beanie hat that I missed last time and complete my lyric sheet collection. Darragh wasted no time in collecting every bit of merch he could too. Chilling with Darragh, Mary and Grainne afterwards, being the walking advertisements that me and Darragh were, eventually Mary and Grainne all but caved to the temptation and acquired the shirts too, so we all looked the part. 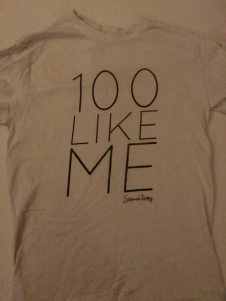 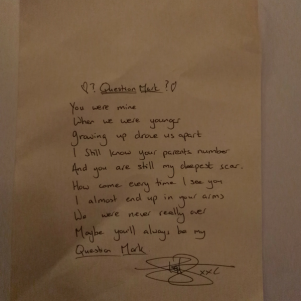 With my 8th show under the belt, I’m eagerly looking forward to my next opportunities. I currently have shows #9 and #10 planned, and I dare say I even have #11 in the bag too but I’m going to hold onto the details of that one for the moment while I confirm it. Coming up on the 25th of this month, Stephanie Rainey will be playing alongside Hermitage Green, The Strypes and Fontaines D.C. at Cork Opera House as part of the Music Cork events ongoing that week. I’m super excited for that as I’ve been eagerly awaiting more Hermitage Green, have been meaning to get around to The Strypes, and have heard good things about Fontaines. Next from there is June 7th, Kodaline at the Marquee which I bought the minute tickets launched, and Stephanie Rainey has just been announced as the support which I am absolutely over the moon about, as a Marquee show from Stephanie Rainey is going to be absolutely mental. That’s about it for this one folks, stay tuned for the next post in the International Women’s Day series which features Pinhole and We March.

Music enthusiast, Merch Collector, blogger of both worlds combined. Check it! www.themerchperch.net View all posts by The Merch Perch